A showcase for relics

Through the middle of Paris runs the Seine, a fine river. In the middle of the river is an island where the first settlers, the Romans, found safety. In the middle of the island is a palace, the Palais de la Cité, home to successive generations of the Capetian monarchy. And in the middle of the palace, at the very heart of the city, is a glittering gothic jewel casket - the Sainte-Chapelle. Ask those generic creatures the man-and-woman-in-the-street to name the famous attractions of Paris and the list is likely to be succinct and predictable. Saint-Chapelle probably won't feature in the top ten, but in a city endowed with so many riches it may well stand as the finest of them all. 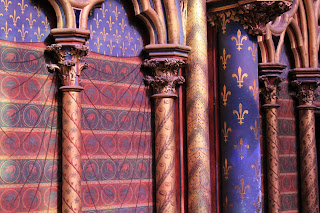 Saint-Chapelle is two chapels built one above the other. The lower, a vaulted crypt dedicated to Our Lady, is a delight of plaster and paint hosting some of the oldest surviving wall paintings to be found in the city, although rather damaged by floods and its use as a grain store during the Revolution. Sadly the mystical effect of this space is today diminished by the siting of a large gift shop in the body of the chapel itself. But enough remains to imagine how it must once have looked, before removal of the altars and funerary slabs from the floor. 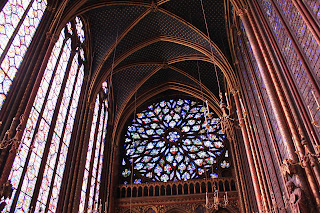 These days the upper chapel is reached by a narrow and unassuming spiral staircase in a shadowy corner of the crypt. It leaves visitors quite unprepared for what they are about to witness and the gasps are audible as successive climbers step out into the space above. Its dimensions are modest enough: 104 feet long, 34 feet wide, a single nave of four bays ending in a seven-sided apse. Nothing especially remarkable so far. But then we come to the statistic that truly marks out Sainte-Chapelle as a wonder of the world: 6,458 square feet of stained glass with barely a supporting pillar between each window. The upper chapel is an engineering marvel, a cage of shattered light in which words and numbers cease to be important. All we can do is stand in awe. We might be in heaven, or close to it, which was the intended effect. Because Saint-Chapelle was built for one purpose - to house the holiest relics in Christendom. 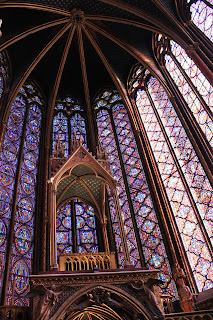 In 1239 King Louis IX of France, a young man not long come of age, newly married and with ambition aplenty, bought the crown of thorns of Christ's Passion. The seller, Baudouin II de Courtenay, the last reigning emperor of Constantinople, was in desperate straits touring Europe with a begging bowl to raise the cash needed to fund the defence of his realm. Louis paid a high price, one hundred and thirty five thousand livres, but it was an astute political investment calculated to make his seat of power a beacon of Christianity for centuries to come. For him personally it also secured canonisation, the only French king to achieve a place among the ranks of saints. Other relics were to follow, splinters and a nail from the True Cross. Louis spent a further one hundred thousand livres on a vast gilded reliquary to contain his precious  purchases. Every year, on Good Friday, they were displayed by his priests in an act of solemn piety. 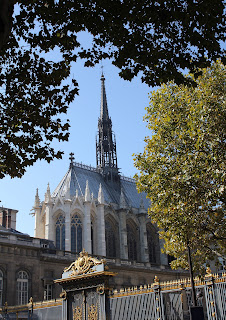 Today the relics are gone, relegated to the treasury of Notre Dame a short walk away. Louis' expensive reliquary was unceremoniously melted down during the Revolution. But miraculously through all the nation's upheavals Sainte-Chapelle remains, its slender filigree steeple (the fourth in all) an elegant feature of the Parisian skyline. The stained glass has been officially declared a national monument inseparable from the architecture. During both World Wars the windows were taken down and they have been painstakingly restored, panel by panel, ever since.

With binoculars, a detailed guidebook and plenty of time, it would be possible to pick out all the biblical and apocryphal stories told in every lancet and roundel, stories that would once have been understood by all without the need for such interpretation. But on a sunny day it is better to stand in the centre of this dazzling space and let the kaleidoscope of light play all around you. Perhaps I am not the average man-or-woman-in-the-street, but for me Sainte-Chapelle is the Parisian number one.
Posted by Anhrefn at 00:00 2 comments:
Labels: holy relics, medieval history, Paris, Sainte-Chapelle, stained glass

A combination of other demands has conspired to keep me away from these pages in recent weeks, some necessary but dull, others entirely pleasurable. But dysnomia.. has never been far from my mind and I have dropped in from time to time to find a steady trickle of page views in my absence. So as usual, thank you to all my visitors, occasional or regular, and hello to Iraj as a new follower. You are most welcome.

Among the entirely pleasurable diversions this month was a five day stay in Paris, coinciding with an unexpected return to summer. Under cloudless skies and temperatures hovering close to thirty degrees Parisians did the only sensible thing, gave up any pretence of work and headed for the public parks and street cafés in their thousands to watch the world pass by. Meanwhile the French press voiced characteristic disdain of its national rugby team at the World Cup, as erratic on the pitch as they were turbulent off it. And France's first lady, Carla Bruni-Sarkozy, told us all in the final days before giving birth to a daughter (the first baby born to a serving president) how she was gasping for a cigarette. It was all so wonderfully French!

And now I am busy sifting through a few hundred photographs of this most photogenic of cities. What to choose as the highlight? I may have to opt for more than one, to follow in a day or two. But for now I just wanted to check in once again to dysnomia... It's nice to be home.