On the dangers of flyting the Devil

Long ago, so the story goes, the Devil was making his way through the glens of Fife carrying a load of rocks. There he came upon Maggie, leader of a coven of local witches who, for reasons unexplained, began flyting him, that is scolding him in rhyme. What was she thinking! True to type the Devil didn't take kindly to the insult, dropped his load and set about chasing Maggie. He caught up with her on Bishop Hill and, with a thunderbolt, devilishly turned her to stone, where she stands to this day.
﻿﻿﻿
It is only one variant of the story and it is hardly unusual. From the lost lands of Lyonesse off the Cornish coast to the clashing giants of Hermaness on Unst our islands abound in accounts of the supernatural. In a neatly self-proving circle, distinctive natural landforms provide both prompt for and evidence of the tales. Carlin Maggie stands bruntly on her crags overlooking Loch Leven testifying to the veracity of the Devil's passing. By return, his intolerance of her taunting gave convincing explanation for a local landmark to generations of our forebears who knew nothing of geology and weathering.

But the tale of Carlin Maggie has other resonances, older and deeper than the moralistic scold-meets-Satan commonplace of the Middle Ages. There are carlin stones to be found in many parts of Scotland, from Orkney to the Galloway Forest, wherever Scots was spoken in place of Gaelic. Carlin is usually translated as witch or hag these days, derived from the same root as the English churl, but it also has affinity to the Cailleach of Gaelic folklore. Cailleach meant originally 'the veiled or hooded one' and it too features frequently in the placenames of the Highlands.

One way to understand the Cailleach is as a feminine embodiment of winter, an old woman of the moors who, in countless Highland folktales, imprisons the goddess of summer, her sometimes daughter, sometimes alter-ego, in a perpetual seasonal tug of war. Thus the life-giving and destroying forces of Nature are portrayed as essentially female, like the swelling mounds and clefts of the mountains themselves. The Cailleach is, therefore, quite literally as old as the hills. 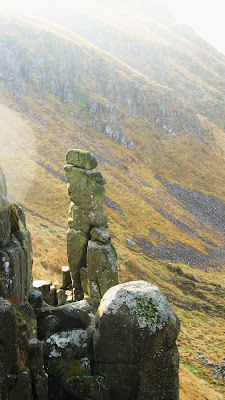 Admittedly Carlin Maggie is more phallic than feminine; forty feet of impudent dolerite looking for all the world like a refugee from Easter Island. But it is arguably no accident that she stands guard over the Paps of West and East Lomond Hills, just as the similarly breast-like Paps of Glencoe and Jura each have their Cailleach. So Maggie has her roots in a very deep past indeed; one where the hills gave suck and long before the Devil of the Christian tradition went walkabout. Perhaps Maggie's flyting of him had less to do with his stealing her rocks and is more her protest at the imposition of a new religion.

A few decades ago Maggie lost her head. A violent storm lashed the scarp of Bishop Hill one night and by morning her topmost stone had toppled. So she's not as permanent as all that. One day she'll go the way of her neighbouring columns, for gravity is not to be denied. But for now she stands as a pagan monolith while our awe of the Devil has waned somewhat. Victim or survivor depending on your viewpoint, she is well worth the climb.
Posted by Anhrefn at 23:17
Labels: Carlin Maggie, carlin stones, folklore, geology, the Cailleach, the Devil, witches