A border raid to Lindisfarne

Returning to the Whin Sill briefly, here is a photograph taken last weekend of Lindisfarne Castle, built on an isolated tooth of whinstone on Holy Island. Beblowe Crag, as this fang is known, is like nothing else on the generally low lying grassy island, accessible by a tidal causeway from the mainland. It is an instantly recognisable landmark for miles along the Northumberland coast.

The castle was first built in Tudor times, a fort to garrison English soldiers for defence against border raiders from Scotland. 'Marauding' I believe is the preferred term in this part of the country. It seems impossible for heritage bodies to mention the Scots without portraying them as marauding, rather overlooking that these were times of hostilities on both sides of a fluid border. Defending the island's haven was a headache Henry VIII had largely created for himself when he dissolved Lindisfarne Priory in 1537 during his vindictive and indiscriminate purge of the nation's monasteries, thereby bringing to an end nine hundred years of monastic life on the island. 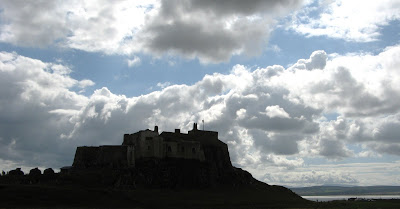 The fort has seen some colourful occupants down the centuries, none more so than Captain Rugg. Renowned for his ebullient hospitality and monstrous bottle-nose (the two may be linked of course), the Captain composed rhyming ditties to Charles I, signing himself 'The Great Commander of the Cormorants, the Geese and Ganders of these Hallowed Lands.' For Holy Island has always been a place renowned for its wild birds, ever since the days of St Cuthbert who befriended its wildfowl.

As relations between the English and the Scots improved the castle's military importance declined although it continued to house modest numbers of troops right until the 1890s. By then in severe disrepair, it was occupied briefly by coastguards before being abandoned altogether. And this was how Edward Hudson found it while holidaying in 1901.

A year later Hudson, who was later to become editor of Country Life, had acquired it and at once hatched a plan to turn the castle into a summer house. He excitedly summoned his gifted friend, the already established architect Edwin Lutyens, and between them they contrived to convert the vaulted dormitories, corridors and batteries into an Edwardian holiday home.

The result is a virtuoso design of twisting staircases, galleries and niches, filled with decorative artefacts and furniture, some designed by Lutyens himself, and feeling as if it had been carved out of the rock rather than built upon it. Lutyens style has been described as 'Romance without Period' and it is certainly hard to pin down, combining Norman arches and herring bone brick floors in a design that looks at once modern and medieval. Later, Lutyens invited his former patron Gertrude Jekyll to design a walled garden, quite an achievement in this wind-scoured, salt-bleached landscape.

Ever since St Cuthbert's mortal remains failed to decompose Lindisfarne has been a destination of pilgrimage and on the day I chose to visit I was far from alone. However, this day the crowds had not come to see his shrine or the renowned illuminated gospels. They had come to see those who harrassed his peaceful Christian retreat. English Heritage, in whose care the remains of the Lindisfarne Priory are entrusted, were staging a re-enactment of Viking raiders from the seventh century. Vikings, it seems, have rarely been more popular and the car parks were brim full of spectators up for a spot of rape and pillage.

I arrived at lunchtime when the Vikings were taking a break from raiding to have a smoke and a Mr Whippy while catching up with their mates in Scandinavia on their mobiles phones. Call me grumpy, but historical re-enactments of this type have a tendency to arouse my latent misanthropy. I don't usually have difficulty suspending my disbelief but there always seems something so... so what? ahistorical, I suppose, about such dramas. I simply cannot forget that underneath their sackcloth and chainmail these characters are wearing wristwatches and nail varnish and M&S underwear. I acknowledge this is a failing on my part and I was clearly in the minority.

So I took my misanthropy for a walk around the island and fortunately for me these Vikings seemed content not to stray too far from the facilities. Holy Island's justly lauded beaches, sand dunes and grassy meadows were left largely uncolonised. Among the tall wind-riffled grasses and the comical cooing of eiders it was not difficult to see why this beautiful island was favoured for a monastery. The word 'Farne' derives from the Celtic for a place of retreat. I would not have been at all surprised that afternoon to have come across St Cuthbert himself, crouching among his beloved birds. You see, my imagination is quite intact. 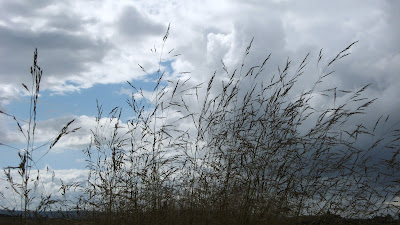