Out with a bang

So that's that then. The season of Edinburgh festivals is over for another year. It ended, as it always does, with an exhilarating firework display to music on the castle rock. There can surely be few more dramatic settings for such a show, and for those not fortunate enough to have tickets to Princes Street Gardens the city centre has many fine vantage points from which to coo and gasp. This year, in keeping with the theme of the International Festival, the music was chosen for its eastern flavours; the composers, mostly Russian, drawing their inspiration from the Orient. Each year the most appreciative cooing and gasping is reserved for the waterfall, a magnesium white cascade that tumbles and bounces down the bare black rock. 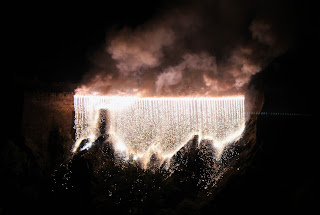 For me the Firework Concert is one of those punctuation marks in the calendar by which time is notched. Whatever the weather it signals the end of summer. As the echoes of the last detonations fade, as the streets clear of spectators and the convoys of road sweepers get to work, there is no longer any denying it - autumn has been heralded in. The concert starts at nine o'clock. A month earlier and it would have been unthinkable to start so early but by now the days are shortening alarmingly. Our wobbly Earth has lurched onwards, like a homebound drunk, veering to the winter side of the street 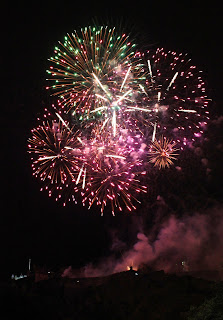 By Monday morning the streets had returned to normal and Edinburgh's daily traffic of suited commuters and shoppers and schoolchildren went on their way. The city is never without tourists but things get decidedly quieter for a while after the fireworks. At Haymarket railway station and in the queues for the airport shuttle it suddenly seemed as if everyone was heading for the exits. And just as suddenly it again becomes possible to book a table in a restaurant and the buses run more or less to time without throngs of disorientated sightseers asking for directions. It doesn't last long. There is just time to draw breath before the first Christmas displays appear in shop windows. No sooner has the temporary seating on the Castle Esplanade - for the past month home to the Royal Military Tattoo - been removed than the skating rink and big wheel will arrive in the gardens. And so the Edinburgh year rolls on.

Invariably the tourists I meet seem genuinely wowed by my home city. They have travelled the globe to be here and Edinburgh doesn't disappoint. Despite the weather doing its level best to rain on everyone's parade, despite the eyesores of the perennially stalled tram project, and the rash of lowest-common-denominator gift shops selling every imaginable Scottish cliché, despite the litter and traffic and scaffolding and street clutter, they are left with an overwhelming impression of an elegant city. I feel very proud and privileged to sit with a coffee in the Canongate, or to stroll along the Water of Leith to Stockbridge and be able to say 'I live here'. 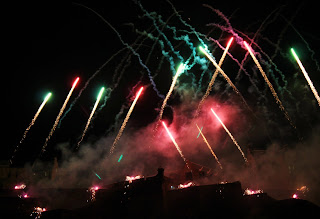 Edinburgh is a wealthy city. But much of its money is sterile and corporate, sealed off behind faceless legal and financial institutions. Tourism brings money too, lots of it. But more importantly the tourists bring vibrancy and colour and life. During the summer festivals the streets are buzzing with their excitement. There's a certain class of Edinburgh resident who gets very sniffy about the festivals but I am not one of them. Of course there's plenty of mediocre art among the thousands of shows on offer, some of it very hammy, some of it pretentious and excluding, but there is also a lot of fun, energy, talent and idealism to be found.

So, summer 2011 goes out with its traditional bang. It won't be long before next season's programmes start arriving through my letterbox. All those things to choose from and all on my doorstep. That's something I hope never to grow complacent or nonchalant about.
Posted by Anhrefn at 00:04
Labels: Edinburgh, festivals, fireworks, the calendar, tourism