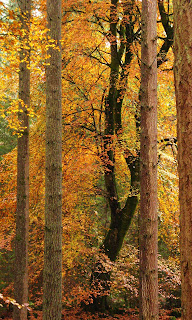 It would be remiss of me to allow autumn to pass without getting all lyrical about the colours. But after the wordiness and (some have commented) gloominess of my previous post it may be better to let my photographs do the talking this time around. At this season I can think of nowhere better in Scotland to enjoy the spectacle of natural fireworks than Perthshire. The highlands arrive abruptly on crossing the boundary fault a few miles north of Perth and all of a sudden fertile rolling dairy pastures are left behind and ahead lie the thickly wooded glens and inclines for which the county is justly renowned. 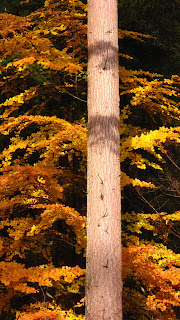 Perthshire boasts some superlative specimen and heritage trees including strong contenders for the tallest, oldest and stoutest in the land. Most famous among them is the wizened and hollowed old sessile oak that grows at Birnam. A pity it is not nearly ancient enough to have been witness to Macbeth's nemesis but it is a relic of the oak forest that Shakespeare set marching upon Dunsinane, thus fulfilling his witches' divination. In more recent times the Birnam Oak has been dwarfed by a monstrous neighbouring sycamore, a mere stripling at 300 years old. 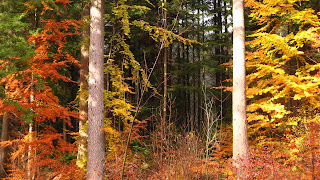 On the opposite bank of the river Tay from Birnam, Dunkeld is one of those places where all the ingredients for Pre-Raphaelite picture postcard perfection have conspired to come together. No wonder that John Everett Millais was drawn time and again to visit, painting landscapes like Chilly October that are typically autumnal in tone. The town is laid siege by trees on all sides; trees that serve as lofty roosts for ospreys in the summer and that smoulder with golds and ochres and snag the lingering mists in autumn. A meeting place of rivers and pocked with small lochans, Dunkeld is a natural amphitheatre in which the trees somehow muffle the droning traffic of the A9 while accentuating the mewing buzzards that wheel high overhead.

There, I am already breaking my pledge not to be wordy! I'll shut up now and let the pictures speak for themselves.